Ms. Miki Yobel I. Tolentino, a second-year student of the Associate in Arts (AA) program, participated in the ASEAN-Korea Youth Summit (AKYS) that was officially held from 10 – 13 August 2021 via online mode. With the theme, “Inclusion and Integration for the ASEAN-Korea Community”, Miki was given the opportunity to interact with the other nine delegates from the Philippines and meet several delegates from other nations, with whom she discussed the topic, “Inequality Reduction across Various Media Platforms: Towards Digital Inclusion” for which they were able to draft an overall recommendation. Through this summit, Miki was able to learn more about the culture, lifestyle, and practices of people from other nations and gain insight into how they solved issues also present in the Philippines. As someone who has always been interested in international relations especially within Southeast Asian countries, Miki made the most out of the AKYS by actively participating in the youth exchanges and expanding her social network. Thanks to the AKYS, Miki was given a platform to contribute to the positive development of the ASEAN-Korea community.

An extension of the AKYS, the ASEAN-Korea Good Action Challenge provided participants like Miki with the opportunity to put their recommendations and plans to action. Composed of 10 delegates from the Philippines, Miki’s team focused on the issue of discrimination faced by the members of the LGBTQIA+ community in the Philippines and urgent need for the Sexual Orientation, Gender Identity and Expression (SOGIE) Equality Bill to be passed in the Senate. In Miki’s words, “SOGIE Equality should be recognized and acknowledged because it is basic human rights, but it should be strengthened by systemic change within legislation.” Through their efforts, the Mujigae Movement was created. Inspired by the Korean word 무지개 meaning “rainbow”, the Mujigae Movement was a two-week social media campaign that focused on several LGBTQIA+ issues, wherein infographics on topics such as the SOGIE Spectrum, LGBTQIA+ and Mental Health, and LGBTQIA+ Figures in the Philippines were disseminated to the public. Through this passion-driven campaign, they were able to expand their concrete call for action and have a fundraiser for their beneficiary organization. 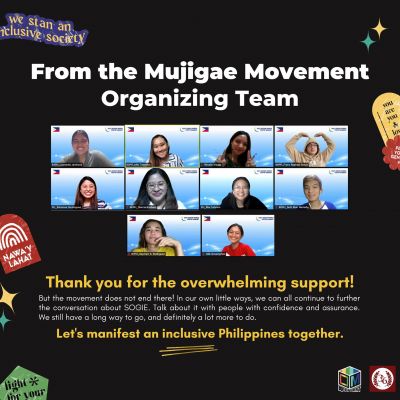 In total, the Mujigae Movement was able to raise Php 30,317, which they donated to LoveYourselfPH, a community organization who encourages the practice of loving one’s self. Aside from this, Miki and her team wrote and sent a petition letter to legislators in the House of Representatives and Senate to support the passing of the SOGIE Equality Bill in the Philippines. Furthermore, to further understand the issue at hand, they conducted a situationer survey for their case study which focused on the attitude and perception of Filipinos towards the LGBTQIA+ community. In addition, they held an educational discussion on the current LGBTQIA+ situation in the country with several members of Bahaghari UP Diliman, a student organization who advocates for the rights of the LGBTQIA+ community. When asked about her experience working with her co-delegates from the Philippines, Miki had this to say:

“All of the members of the Philippines team are responsible and diligent with their tasks. It has been and will always be a pleasure working with them. Their drive to create change in society and their intellect motivate me to do better each day.”

On 13 November 2021, their efforts were duly recognized as they were awarded third place in the ASEAN-Korea Good Action Challenge via Zoom. Miki feels happy and grateful for the opportunity and platform that were given to her and the team, as their great efforts to contribute to the development of the ASEAN-Korea community were validated with this recognition. Although their campaign ended last November, Miki confirms that the Mujigae Movement was able to achieve its goal “to further the conversation about SOGIE Equality in our country so that more people will be aware of the issues.” Furthermore, Miki and her teammates will continue this advocacy by promoting inclusivity in their communities.

In this endeavor, Miki was able to apply all of the experiences and lessons she had learned from the courses and activities of the AA program. Through AA, Miki became more aware of the country’s social issues and systemic problems, which made her more compassionate and understanding towards the communities she had and will encounter.

From this endeavor, Miki was able to learn a lot and contribute to the promotion of SOGIE awareness in the Philippines. With her experience, Miki hopes to inspire her fellow students to do the same:

“Everybody should be aware of what SOGIE is and why equality is being fought for, whether they may be part of the LGBTQIA+ community or not. My message for my fellow students is to respect and acknowledge everyone because everyone deserves equal rights regardless of who they are and who they love. Continue the SOGIE conversation within your communities.”

For more information about the Mujigae Movement, you may visit this link: https://www.facebook.com/mujigaemovement/